Our feathered friends out here on the farm (I’m loving alliteration today) are enjoying their last few days/weeks/month of free-range living. Not because we’re going to do anything drastic to them, but because most of them don’t like walking in the snow. Up here in northern Minnesota we’ll eventually get hit with several inches of snow that won’t melt until March or April and our coop door will no longer stay propped open.

Thankfully, our chicks and the duckling have grown up fast. It’s astonishing to watch how quickly the little critters mature. The day-old chicks we received on May 11th are now as big as all the other chickens. Some of the young cockerels (another word for rooster) tower over their elders. The duckling is almost as big as his (or her but I’ll use male pronouns since our daughter has named him “Huey”) parents, which is astounding since he hatched the last week of August.

Here are some pictures of the young chickens, beginning from the day they arrived.

The hens have just started laying eggs this past few weeks. Their eggs start out small and will slowly increase in diameter until they are “jumbo-sized.”

A pullet egg beside two eggs from experienced layers.

For the first year, they’ll lay one egg about every 25 hours. In late summer after they turn one year old, they’ll molt and from then on will lay an egg about every other day. Until they get too old to do that. I read somewhere that you can figure out which hens aren’t laying anymore by measuring the distance between a hen’s pelvic bones. In a large hen, it should be possible to fit three or four fingers between the pelvic bones if she’s still laying. But I’ve never even tried to find out. I guess I figure they’ve given me hundreds of eggs in their lifetime and when they’re done, they still deserve a nice retirement. We still have a few hens from our very first clutch seven years ago.

Here is a picture of one of the old Barred Rock hens. We lost our last cock from that clutch this past spring. 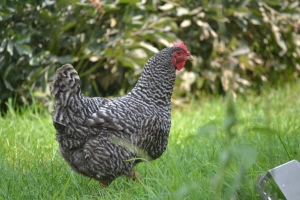 I like diversity in our chickens, so I order a different breed every time. It makes for a colorful yard and it also makes it easier to identify individual birds. We have one old Buff Orpington hen, Tilly, who lost her eye as a chick. I make sure to feed her apart from the others since she’s last in the pecking order. Yes, there really is such a thing. Chicks start working through that when they’re a few weeks old. The mellower the chick, the lower in the pecking order. The aggressive ones get first dibs on everything but none of our 60+ chickens goes hungry. The hanging feeders in the coop always have layer rations in them. And thank God for heated waterers or supplying water to them throughout our winters would be tough.

Finally, I’ll end this post with some other “Footloose” pictures from laid-back moments in our farm life.